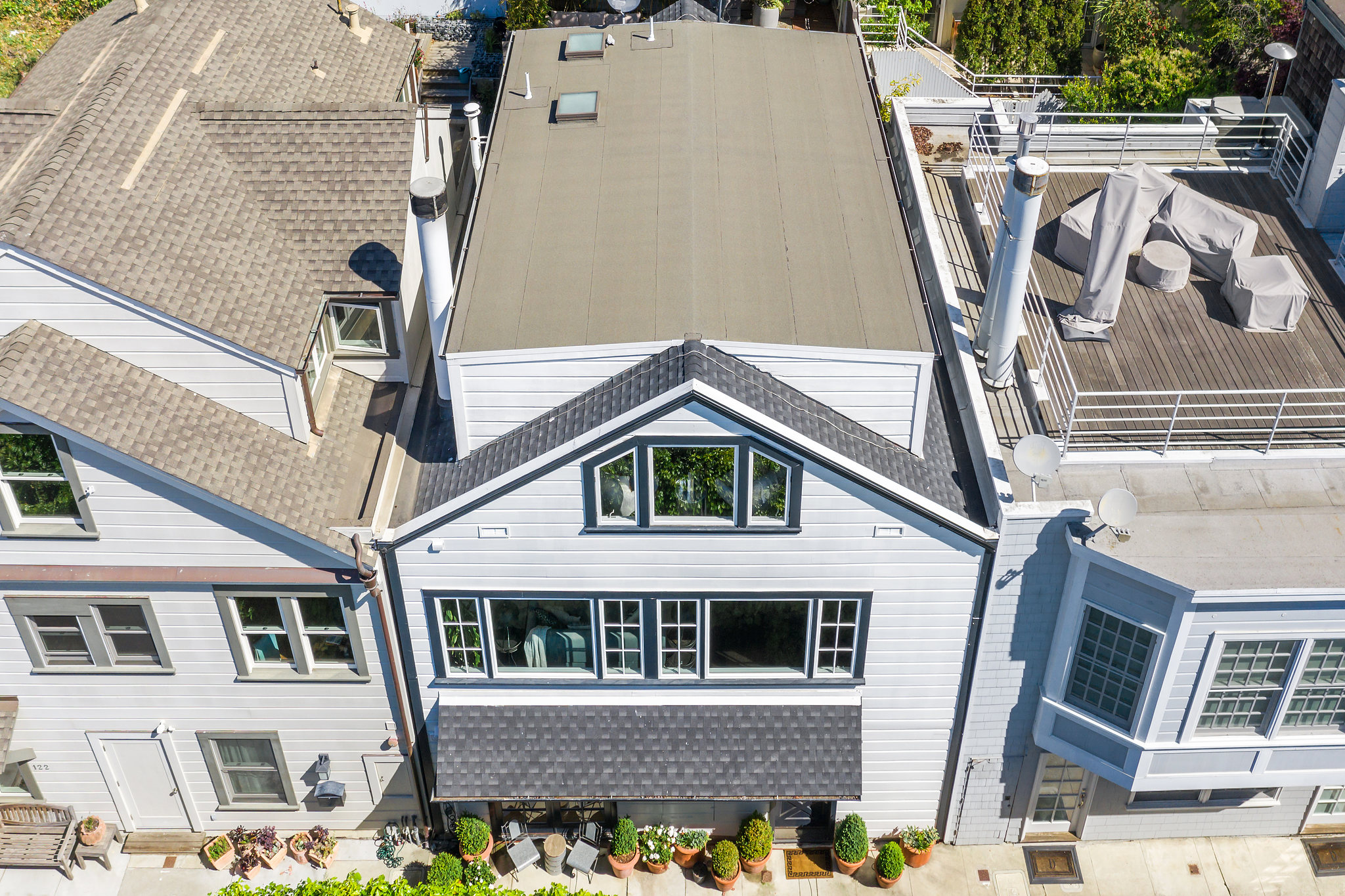 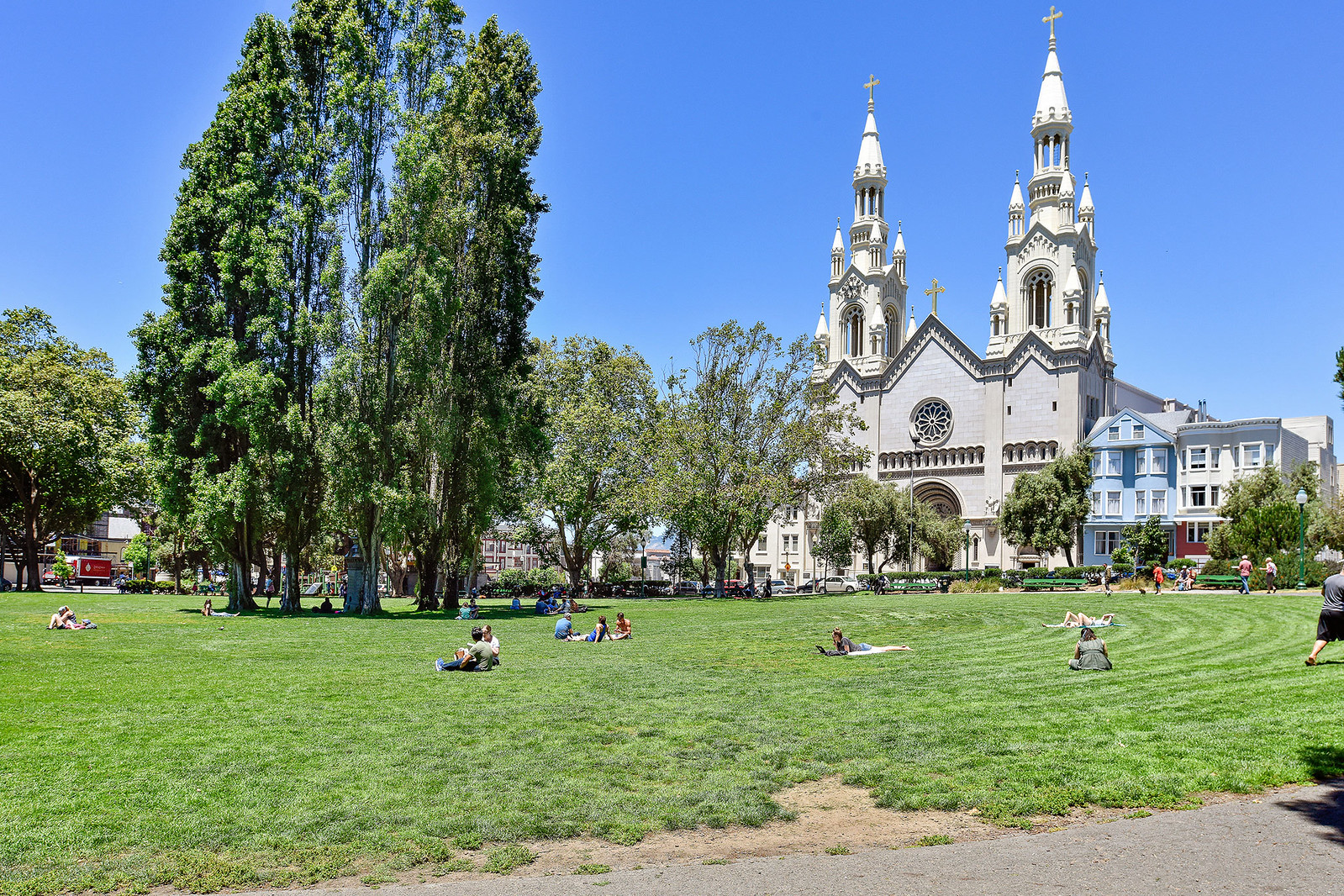 Welcome to 118 Alta in San Francisco’s Telegraph Hill! This urban retreat is quite the head-scratcher. How can a home be located in the heart of one of America’s most densely populated cities, yet be so peaceful and serene? The answer is best experienced in person, as this section of Alta is an absolute gem— off the beaten path, void of automobile traffic, and behind a privacy hedge— giving a very European feel.

The 3-story residence is technically a condo but lives like a single-family home. Boasting 3 bedrooms, 2.5 baths, and ~2,363 square feet, the versatile layout can accommodate almost any need. The history-rich home offers an exhaustive list of amenities, including sweeping views of San Francisco’s iconic skyline!

The middle level features an open living / dining concept, oriented towards the view and bathed in sunlight. The living room is centered by a wood-burning fireplace and is the perfect place to entertain guests or cozy up with a book. The fireplace features a decorative mantle and marble surround. Two massive picture windows clear the privacy hedge out front, letting in views of skyscrapers— so close you can almost reach out and touch them!

The formal spaces blend effortlessly into casual as you make your way towards the rear of the main level. This area features the family room and kitchen, open to one another and both enjoying deck access through double sliding doors. The family room has gorgeous built-ins, perfect for organizing collections or displaying art, and a recess for a flatscreen.

The flow works very well for entertaining but also lends itself to everyday livability. With a great microclimate, the sliding doors to the deck can remain propped open much of the year. The deck is just off the kitchen, great for grilling out. Gorgeous professional landscaping and aromatic blossoms surround this enchanting setting.

Upstairs is the ultimate primary bedroom suite! The primary bedroom enjoys epic skyline views and checks all your boxes. Dual closets, sitting area, mounted flatscreen, and renovated en-suite bath are towards the front, and a lovely home office is perched above the garden at the rear. The home office could serve as a third bedroom if desired.

The lower level features a second bedroom suite with walk-in closet, luxuriously appointed bath, and French doors that open to a front patio on Alta. The bonus room is currently utilized as a home gym— the perfect spot for the Peloton! Just off the gym are two storage rooms, keeping the rest of the house clutter-free.

Other features include Nest thermostat, integrated speakers, gorgeous oak hardwoods, fantastic closet space & built-ins, and skylights. The parking space is located in an adjacent building and is transferrable to the new owner. The space is in a private, secured garage.

All in all, 118 Alta offers an incredible lifestyle and is ideal for both full-time and pied-à-terre buyers. The setting is simply magical— more on that below! 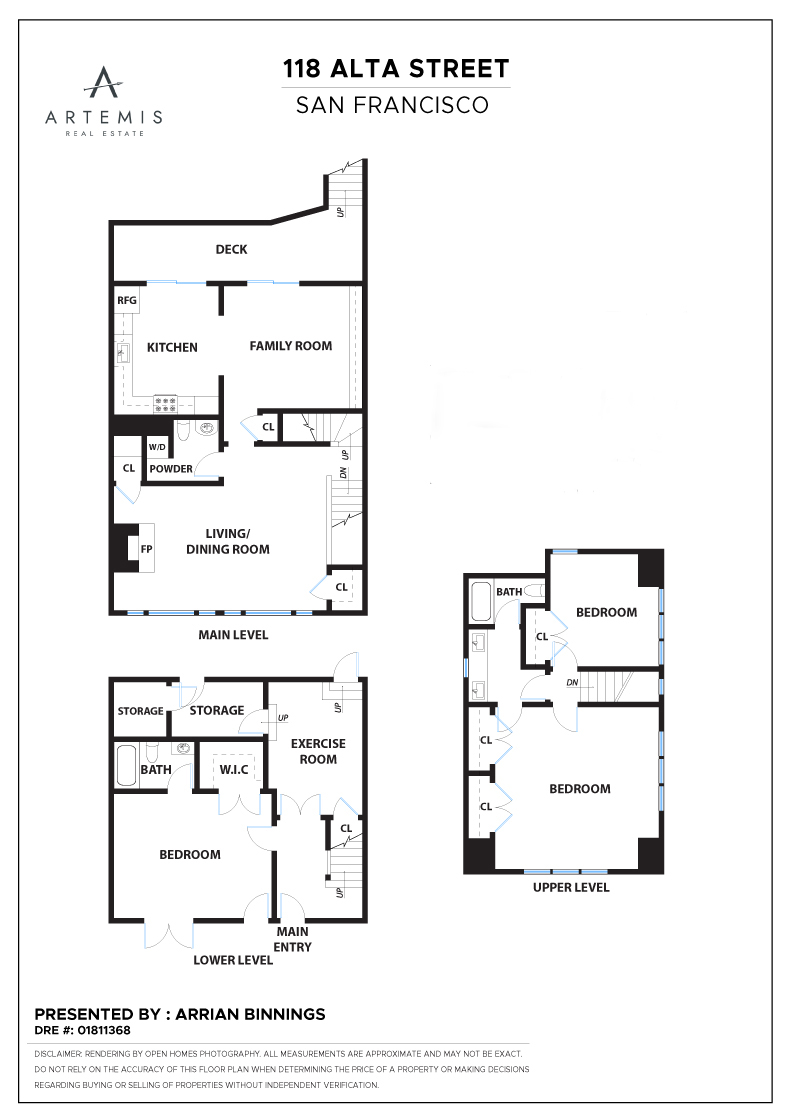 Letter From The Sellers 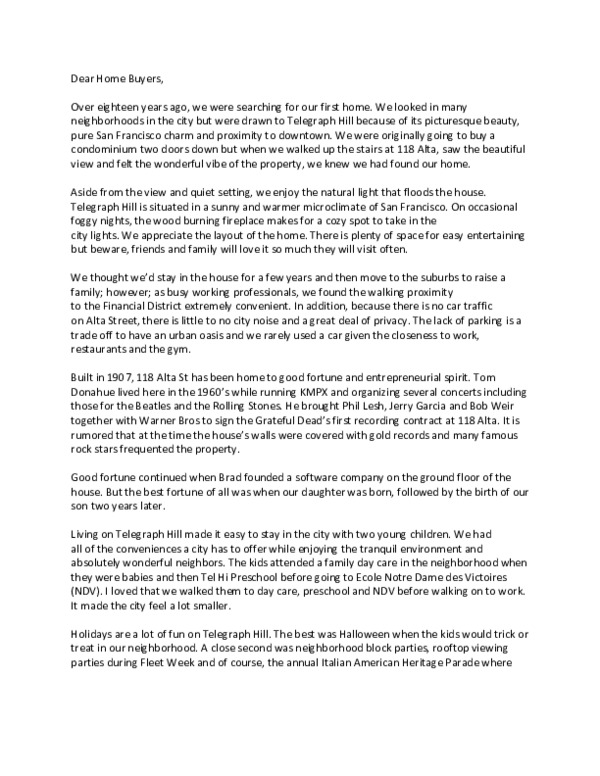 The neighborhood also has the distinction of being the spiritual home of the beat poets who rose to fame in the 50s and 60s - Jack Kerouac, Allen Ginsberg, William Burroughs, and others. Local legends such as Francis Ford Coppola wrote The Godfather at one of the tables at Caffe Trieste, and Robin Williams performed regularly at 901 Columbus.

This exciting stretch of city brings a devil-may-care attitude to city life. Those lucky enough to live here, enjoy evening's awe-inspiring views from hilltop patios in the rows of exquisite homes that line the elevated blocks.

It's in the dimly lit old-fashioned neighborhood haunts where one can still find the authentic life of Telegraph Hill and North Beach. City Lights, the infamous rebel poet bookstore, is where Allen Ginsberg's HOWL was first published. Some of the most extraordinary shopping in the city can be done along Grant Street in the upscale boutiques. And above all, don't miss your chance to have some of the best Italian food this side of the Amalfi Coast. A remarkable dining opportunity at your fingertips thanks to a history of immigrants who made this area home in the 1920s and 30s.

The "beach" in North Beach is no longer there. There was a time where the tides of the bay lapped up against Taylor and Francisco Street. Today that waterfront has long since been replaced by 19th-century landfill, known now as the Barbary Coast.

You'll never run out of history to learn or places to explore in this incredibly distinct American neighborhood. And 118 Alta is perched above it all!